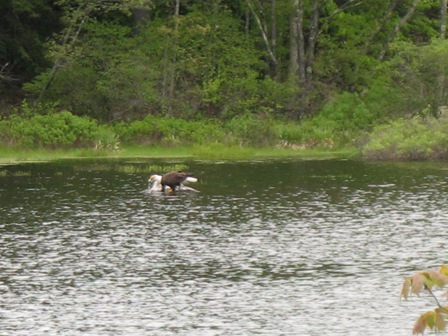 Mom I was wondering," began my three-year-old daughter a couple of weeks ago while we were driving past Lake Massasecum" the lake we call home. I had no idea what was going to come next from my inquisitive, little scientist. "Where do"¦" she continued. At that point, I began to panic. Was she going to ask the question that most parents dread"was she going to ask where babies come from? Please, no, I begged, I'm not ready to explain that yet.

Ah, the patience of a three-year-old. I needed to respond fast to capitalize on the teachable moment, but wondered how to sum up complicated geological processes, some that take thousands of years, in a way that a preschooler might make sense of. "Well, lakes are big holes," I began. "Really big holes in the ground that took a really, really long time to fill up with rain and melted snow."

"But, how did the holes get there?" This, of course, was her next question.

"Now, that's a good question, a very good question." I responded, trying to buy some time. "Well, you see, the holes could have been made by the ground moving, volcanoes erupting, or mud sliding around. InNew Hampshire, most of the holes were made by huge chunks of ice moving around."

"Hmm"¦ok." She seemed satisfied, but not terribly intrigued by the explanation. As quickly as her curiosity about how lakes came to be was piqued, it vanished. The conversation abruptly transitioned into an interrogation about what we were going to have for lunch.

A few mornings later, much to my surprise, she continued our "how lakes came to be" discussion. "Mom, you know what I think?" I hadn't a clue, but knew that she was going to tell me. "I thinkLakeMassasecumwas dug out by a bunch of workers with shovels. It took about a week and then they left and dug outLakeSunapee." All I could do was laugh"can you just imagineNew Hampshire's approximately 1,000 lakes and ponds being dug out by hand? What an undertaking that would have been! Of course some lakes have been partly constructed in that way, but most have had more exciting origins, exciting at least in geological terms.

For those of you who don't believe that our lakes are just big holes dug out with shovels which then filled with water, and want to learn how most of them came to be, I invite you to read on.

Lakes are bodies of water that have filled depressions (called "basins") in low-lying areas on the landscape. There are a number of natural processes that can form lake basins which eventually fill up with water from rainfall and snowmelt and carried in by streams, rivers, underground springs, and groundwater.

Most of New Hampshire's lakes were formed by the movement of glaciers approximately 15,000 years ago. As the glaciers moved across the landscape, tops of mountains and hills were scraped off and other areas of the landscape were gouged out under the tremendous weight of the ice sheet which was, at times, a mile thick over New Hampshire. As a result of this action, the face of the landscape was permanently altered. When the glaciers finally began to melt and recede to the north, they left behind huge basins and piles of rocks and boulders strewn across the landscape. Over time, the basins filled up with water, forming many of the lakes we now know in New Hampshire. Lake Winnipesaukee, formed by glacial activity, and with a surface area of approximately 72 square miles, maximum length of 21 miles, and width of up to nine miles, is the state's largest lake. Newfound Lake in Bristol, also formed by glacial activity, with a maximum depth of 183 feet is the deepest lake in the state. Receding glaciers also left behind blocks of ice buried under sand and gravel. As the remnant ice melted, the sand and gravel caved in leaving behind relatively circular basins that eventually filled with water"these types of lakes, referred to as "kettle ponds," include: Chocorua Lake in Tamworth; Pea Porridge Pond in Madison and Conway; and Mirror Lake"one of the most highly studied kettle ponds in the world"in the Hubbard Brook Experimental Forest in the White Mountain National Forest near Tamworth.

Some of New Hampshire's lakes were formed by rivers. As a river winds its way across the landscape, the water going around the outside edge of a bend in the river has the most speed and power"this power leads to the wearing away (erosion) of the outer bank of the river, which allows the river to meander further and further out into that eroded bank and the surrounding landscape. The eroded materials (dirt, sand, gravel, and rocks) are carried by the fast-flowing water and deposited and accumulate where the river has less energy, typically the inner portion of a river bend. Eventually, the course of the river may change, seeking a straighter path of less resistance. The outside areas of the meanders may then be cut off from the main river channel forming an "oxbow lake." Oxbow lakes are typically shaped like a "U" or "C" and are not very deep or old. InNew Hampshire, Horseshoe Pond inConcord is an example of an oxbow lake formed by the meandering of theMerrimack River.

Lakes are formed by the movement of the earth's crust. The outer portion of the earth's crust is made up of approximately a dozen or so slabs of thick rock (tectonic plates) that fit together like a jigsaw puzzle. Forces from deep within the earth cause these plates to move and sometimes collide, creating mountains and basins. These basins may eventually fill up with water, creating "tectonic lakes." Notable tectonic lakes include:LakeBaikal in Siberia, the world's oldest (at least 25 million years old) and deepest lake (5,387 feet); and Lake Tahoe inCalifornia andNevada, which is approximately 2 million years old and 1,645 feet

Lakes are formed by volcanic activity. When forces from deep within the earth cause volcanoes to erupt, sometimes rock and other earthen material are violently ejected upward and a depression is left behind. Other times, molten rock seeps slowly out of a volcano, making it a hollow cave with a relatively thin and heavy roof which may collapse. Both volcanic processes can result in a basin sealed off with solid rock on the bottom that eventually fills with water. Some of the deepest lakes in the world are "volcanic lakes." Crater Lake in Oregon, formed approximately 7,700 years agoby the collapse of the volcano Mount Mazama, is, at 1,949 feet deep, the seventh deepest lake in the world and the deepest lake in the U.S.

Lakes are formed by landslides. Landslides are sudden movements of large quantities of loose soil and rocks and other earthen material, usually caused by abnormal meteorological events, including excessive rainfall and earthquakes. A temporary or permanent "landslide lake" can form when a large amount of earthen material falls from a steep slope into a stream valley, damming the flow of a stream or river. InNew Hampshire, the south side ofProfileLake, located in Franconia Notch at the base ofCannonMountain, is dammed by landslide debris.

Lakes are formed when underground rocks are dissolved by water running across the landscape. Rock formations made of salt or limestone are easily eroded away by water which can result in basins that fill up with water. These types of lakes, referred to as "solution lakes," are most common inFlorida, and can also be found in the mid-west. Since most of the rock formations inNew Hampshire contain primarily granite which is not easily eroded, and few contain significant amounts of limestone, solution lakes in theGraniteState are not common.

I wouldn't a good mom if I didn't acknowledge that my daughter was at least partially right"some lakes are indeed man-made. Throughout history and across the globe, man-made lakes have been constructed to provide drinking water, power, recreation, or flood control to the public. These lakes usually go hand-in-hand with dams which control the amount of water in them. One ofAmerica's most well-known man-made lakes isLakeMeade which was created by the construction of the Hoover Dam. InNew Hampshire, man has made many lakes and ponds larger than Mother Nature originally designed them by putting in dams at their outlets.

No matter how each of New Hampshire's approximately 1,000 lakes and ponds were made, each one is unique and has much to offer"boating, fishing, bird watching, swimming, waterskiing, tubing and much, much more.