Houses are already moving fast in the Manchester-Nashua area. Nicer weather is expected to quicken that pace.

A three-bedroom ranch-style house in the Elwyn Park area of Portsmouth went on the market for $330,000 on March 20 and was under contract two days later.

These tales from the front lines are among the signs pointing to the most robust New Hampshire housing market for sellers in more than a decade, as the long, dreadful winter finally gives way to spring.

Realtor.com last week rated the Nashua-Manchester market as the 11th hottest in the country, based on the number of residential real estate "views" on listing websites, com­pared to the number of listings posted, suggesting that there are a lot of potential buyers chasing a limited inventory.

The same can be said of the Seacoast area and the Upper Valley.

"We're finding that homes that are new to the market and priced right are not staying on the market for very long," said Marion Cheney, president of the Seacoast Board of Realtors. "And we're getting into something we haven't seen for years, which is multiple offers."

Real estate agents and buyers are starved for more listings. Home building has been at a virtual standstill, leaving existing homeowners as the only significant source of new inventory for the upcoming spring and summer season.

"Between January 1st and now, we've seen 470 houses either closed or under agreement in Manchester and Nashua," said Al Michalovic of Four Seasons Sotheby's International Realty in Hanover. "That's a huge number of houses and the inventory is not going to support that kind of pressure."

If 470 houses were sold in the state's two largest cities during the slowest time of the year for home sales, the current inventory of 300 properties in both cities is not going to last long as the busiest sales time approaches.

"I would expect to see some price appreciation," said Michalovic. "We have moved away from a buyer's market to a seller's market, where there is less negotiation and firmer pricing."

Other than the lack of properties for sale, the stars are finally aligned for a big bounce in the housing market.

Foreclosures and short sales in New Hampshire have dipped to pre-recession levels, with investors having gobbled up most of the distressed inventory. There were only 133 foreclosure deeds filed in February, the lowest number for any month in the past 10 years. The state's 3.9 percent unemployment rate is the lowest since the fall of 2008, when the recession was getting under way.

On Thursday, mortgage giant Freddie Mac reported that the national average for a 30-year, fixed-rate mortgage is down to 3.66 percent, compared to 4.34 percent just 12 months ago. Newly approved mortgage rules enable some buyers to qualify for FHA loans with down payments as low as 3 percent of purchase price.

With the Federal Reserve Bank likely to raise interest rates at some point in the next 12 months, buyers who've been sitting on the sidelines are getting ready to jump in the game. If only there were houses to buy. The shrinking inventory was anticipated, but the rate of decline has been precipitous.

"We're finding that in some markets the inventory is as much as 30 percent lower than the same period a year ago, as we enter what is typically one of the most demanding times for buyers to look at properties," said Bill Weidacher, an agent with Keller Williams in Bedford. 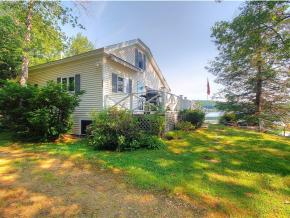 Great Home with Room to expand

Despite the problems with supply, prices are not skyrocketing at the annual rates seen in the housing booms of the mid-1980s and mid-2000s.

"The market is still very price-sensitive," said Michalovic. "Over-priced houses aren't going to sell just because they are on the market."

Prices have been appreciating at more than 8 percent so far this year, compared to the same period last year, which would put median prices this summer in the $260,000 range.

In addition to low supply, something else is contributing to the pressure on prices, according to real estate agents " the long-awaited arrival of the older millennials in the housing market.

Agents say they are seeing a lot of buyers in the 25to 35-year-old age group, something that economists had predicted might not occur.

"Despite all the handwringing about millennials' supposed lack of interest in home ownership, households headed by these older millennials were 70 percent more likely than average to buy a home in 2014," according to Jonathan Smoke, chief economist at realtor. com. "Household formations are on the rise, and we expect the majority of households to be formed this year to come from this age range. Living with Mom and Dad is so 2012."

Waiting for the warmth

Last year, the National Association of Realtors found the share of homes purchased by older millennials was 28 percent. That made them the most represented age group, with 35- to 44-yearolds the next largest at 20 percent.

That trend is reflected in New Hampshire, where agents say they are finally seeing younger buyers, many of whom are paying a monthly rent that is equal to or higher than the mortgage they would face on a first home.

"I coached high school football for 11 years, retiring in 2013," said Michalovic. "And I've got four of my former players from the Class of '03 or '04 who are purchasing."

Agents and buyers expect inventory to increase with rising temperatures.

"Sellers have been tackling the inside projects they want to do, but a lot of them don't want to put their home on the market until after spring cleanup outdoors," said Cheney. "I was just talking to a couple over the weekend, and they are waiting for the spring weather.

""˜The place is just gorgeous when the grass is green,' she said. "˜But I'm looking out the window, and it's snowing.'" 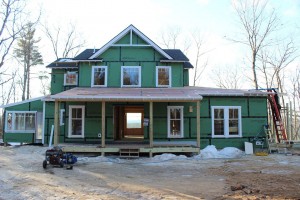 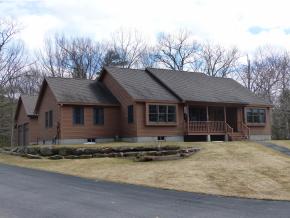 Sandwich NH Get away from it ALL in this high quality, lovingly built home on eight private acres with frontage on the babbling Weed Brook! Such a convenient location in eclectic Sandwich is very rare indeed! Peace, quiet, serenity"¦you'll find it here! A nicely wooded lot with perennial gardens that will bloom all season. There's plenty of space to plant your summer vegetables too! This home lacks nothing. It's easy to heat or cool and has plenty of light year round. Enjoy the inviting warm oak and cherry woods throughout, huge eat-in kitchen, formal dining room with built-ins, great room with stone hearth and gas wood stove, and first floor master with private bath and jetted tub. The generous lower-level is finished with a comfy family room, playroom, wet bar, office, and laundry. 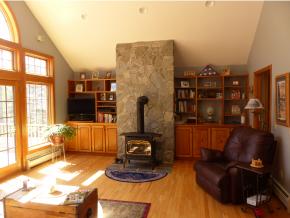 The large attached garage and shed offer storage for your boat and toys plus overhead storage! Also an enclosed porch, kennel and garden shed! Squam Lake is just down the road, as is Lake Winnipesaukee.  The home feature 3 bedroom, 4 baths plus a 3 car garage and utility shed. Skiing - Golf - Shopping and the Sandwich Fall Fair are all just a short drive away.  Listed by Keller Williams Lakes & Mountains Realty, Mary-Ann Schmidt    See this now! 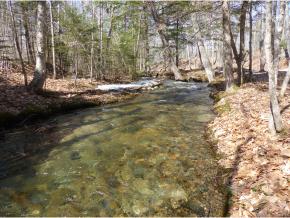 8 private acres with brook and plenty of Wildlife