Below are some examples of diseases that exist in New England and affect the animals around us. Chronic wasting disease is a neurological (brain and nervous system) disease found in deer and elk in certain geographical locations in North America. To date, CWD has not been detected in any deer populations within the state of Vermont. The disease belongs to a family of diseases known as transmissible spongiform encephalopathies (TSE) or prion diseases. The disease attacks the brains of infected deer and elk and produces small lesions that result in death. While CWD is similar to mad cow disease in cattle and scrapie in sheep, there is no known relationship between CWD and any other TSE of animals or people. It is not known exactly how CWD is spread. It is believed that the agent responsible for the disease may be spread both directly (animal to animal contact) and indirectly (soil or other surface to animal). It is thought that the most common mode of transmission from an infected animal is via saliva, urine and feces. As of 2012, the following states and Canadian provinces had found CWD in their deer or elk populations: Colorado, Illinois, Iowa, Kansas, Maryland, Michigan, Minnesota, Missouri, Montana, Nebraska, New Mexico, New York, North Dakota, Oklahoma, Pennsylvania, South Dakota, Texas, Utah, Virginia, West Virginia, Wisconsin, Wyoming, Alberta, and Saskatchenwan.

There currently is no convincing evidence that the agent of CWD affects humans. However, public health officials recommend that human exposure to the CWD agent be avoided as they continue to research the disease. Health officials advise hunter not to consume meat from animals known to be infected with the disease. Boning out meat is recommended. In addition, they suggest hunters take the normal simple precautions when field dressing carcasses. For more information on Chronic Wasting Disease

Rabies virions: are bullet-shaped with 10-nm spike-like glycoprotein peplomers covering the surface. The ribonucleoprotein is composed of RNA encased in nucleoprotein, phosphorylated or phosphoprotein, and polymerase.

Rabies is the most important wildlife disease risk to humans and pets in Vermont. Although rabies is a virus that is 100% fatal if not treated, it is also 100% preventable. Freezing does not kill the rabies virus. Heat and/or chemical agents such as Clorox will. Raccoons, bats, skunks and foxes are the primary carriers of rabies in New England. Animals in the final stages of rabies may appear aggressive, tame, disoriented and may drool or make strange sounds. The rabies virus is primarily concentrated in the saliva, brain and spinal column of a rabid animal. It is not found in blood, feces, or urine. If you think you have been exposed to rabies (wash the wound thoroughly", or if a suspect rabid animal is encountered, cal the Vermont Rabies Hotline 1-800-4-RABIES (1-800-472-2437). If an animal is to be destroyed, avoid shooting it in the head as this makes testing for rabies difficult. Testing for rabies will occur if a person or unvaccinated domestic animal is exposed, the animal was found in a town in which rabies has not yet been detected, or under some other special circumstances. Some trappers, animal control agents and wildlife biologists have received pre-exposure rabies treatments as a precaution. If interested, contact your personal physician to discuss your personal situation. More information on Rabies may be found on the Vermont Department of Health Website or on our Nuisance Wildlife Page Canine distemper is caused by a virus that has a broad host range among North American carnivores including the mink, striped skunks, fishers, badgers, black-footed ferrets and weasels. Canine distemper virus is related to rubeola (red measles) but poses no known threat to humans. Canine distemper virus infects cells of the immune system, lungs, gastrointestinal and urinary tracts, skin, and brain. It is shed from the body in nasal and conjunctival exudates, feces and urine. Transmission requires close interaction between animals to enable direct contact or aerosol exposure because the virus does not persist long outside the body under most environmental conditions. Infected animals may shed virus beginning about 5 days after infection for a period of as long as 6 weeks or until death. The signs of canine distemper are similar in all susceptible species. Reddening on the skin of the chin, muzzle, ears, around the eyes, ventral abdomen, limbs and footpads is an early sign. Scurfiness, or a moist rash with thickening of the skin and slippage of fur, may develop in these areas. The muzzle and footpads may become thickened and dry. There may be an ocular discharge and the eyes may become encrusted and gummed shut by purulent exudates. Some animals lose their appetite and become emaciated, whereas others develop diarrhea. Pneumonia may develop, resulting in labored respirations. Nervous signs, which are due to encephalitis, include loss of fear of humans, daylight wandering by nocturnal animals, stupor, circling, twitching or spasms of limbs, muscles, muzzle, lips and head, ataxia, paralysis, coma and convulsions. Outbreaks of canine distemper may have a significant impact on local or regional populations of raccoons, and on red foxes, gray foxes and skunks in parts of the United States and on the raccoon population in Canada. Transmission of canine distemper is likely density-dependent; the disease poses a threat mainly to concentrated populations of previously unexposed susceptible species. The origin of virus introduced into susceptible populations is unclear, there often appears to be little relationship between canine distemper activity in domestic populations and that in wildlife. 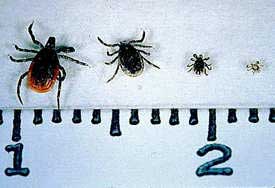 Lyme disease is caused by a coiled bacterium (spirochete) called Borrelia burgdorferi. The spirochete is named for its discoverer, Dr. Willy Burgdorfer of the United States Public Health Service, who identified it in the bodies of the tiny "deer ticks" which carry it to humans. First reported in Lyme in southeastern Connecticut in 1976, the illness was named after that town. The tick which transmits the Borrelia burgdorferi spirochete to humans is called lxodes dammini. It is smaller then the common dog tick and lives in grassy and wooded areas, they feed on small and large animals like mice, shrews, birds, raccoons, opossums, deer and occasionally humans. The lxodes dammini tick is principally found along coastal areas from Delaware to Massachusetts, and also in Wisconsin and Minnesota. The tick's preferred habitats are wooded areas and adjacent grasslands. A tick bite is not painful. The tick is so small that its presence often goes unnoticed. In most cases the tick simply bites, draws blood for its nourishment and drops off. If the tick happens to be infected with spirochetes, it may transmit them during the feeding process. It is important to realize that a tick bite does not always result in Lyme disease. The best way to remove ticks is to use small tweezers. Do not squeeze the tick's body. Grasp it where the mouth parts enter the skin and tug gently, but firmly, until it releases its hold on your skin. Save the tick in a jar labeled with the date, the body location of the bite, and the place where you think you acquired the tick. Your doctor may find this information and the tick specimen helpful in diagnosis, in case a rash or other symptoms of Lyme disease subsequently appear. Wipe the bite area thoroughly with antiseptic. Early symptom of the disease is a slowly expanding red rash called erythema migrans. Only about 75 % of infected individuals will develop an observable rash. Anyone who has had a tick bite followed by a rash should consult a physician. Treatment at this stage usually is rapidly effective. Oral antibiotics are the preferred treatment for early stages of the disease. If left untreated, the rash will expand for several weeks; then it will slowly fade. Later symptoms of the untreated disease can include complications of the heart, nervous system or joints. Most patients, particularly if treated by their doctor for the skin rash, do not develop these symptoms. Prevention can be summarized easily: avoid tick-infested areas, wear protective clothing, check your clothing, body and pets for ticks and remove them promptly. Raccoon Roundworm Raccoon roundworm is common in raccoons in the Northeast and Midwest. Roundworm causes the potentially life threatening condition "larval migrans" in a variety of species, including humans. Infected raccoons are normal in appearance and behavior, but in other animals neurological signs are noted, and often mistaken for rabies. Transmission to humans occurs when microscopic roundworm eggs in feces are accidentally ingested. Roundworm eggs can remain infective for years, and raccoon feces should be avoided. Normal precautions such as the use of surgical gloves, and the washing of hands and surfaces used for skinning should be observed. If cleaning up raccoon feces be sure an wear a mask and use bleach on any tools used. Keep in mind that burning is the only effective way to kill roundworm eggs. Forty to sixty percent of raccoon may carry this parasite.

Information taken from the Vermont Fish and Game Website - Visit this link for more information. http://www.vtfishandwildlife.com/wildlife_diseases.cfm#rabies