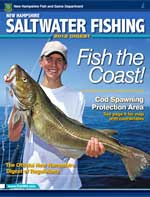 DURHAM, N.H. - Coastal anglers should be aware of several  new rule changes for 2012 that are now in effect regarding the taking of  different species in some New Hampshire coastal rivers and other  coastal/estuarine waters.  These changes,  recently implemented by the New Hampshire Fish and Game Department, include the  following:

Please note that because these rules went into effect  after the 2012 NH Saltwater Fishing Digest went to print, they are not included  in the publication. The Digest is a good  resource for information on other marine fishing rules.  Download it at www.fishnh.com  or pick up a copy at any  Fish and Game Department office or licensing agent.

The New Hampshire Fish and Game Department is the  guardian of the state's marine, fish and wildlife resources and their  habitats.  The Department's Marine Fisheries Division is located in  Durham, N.H.  Visit www.wildnh.com/marine.