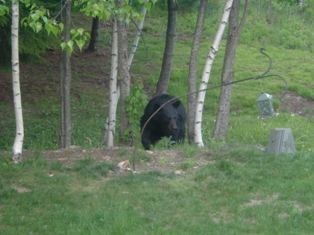 This bear was visiting our home

CONCORD, N.H. - Bears seem to coming out of the woodwork  in New Hampshire these days. The New  Hampshire Fish and Game Department is dealing with numerous bear complaints  from around the state, many of them involving female bears with cubs.

Last Saturday (June 16, 2012), a Grafton, N.H., woman was  injured after encountering a bear with cubs on her deck while letting her dog  out.  Female bears are often protective  when cubs are present, or when approached by a dog.

Because a person was injured in the Grafton incident,  Fish and Game responded by setting a culvert (live bear) trap near the woman's  house for three nights, as protocol requires, to try to capture the bear if it  returned. As of Wednesday morning (June 20, 2012), the bear had not returned  and the trap has been removed. Wildlife officials consider it unlikely that the  bear will return to the site. No additional trapping is planned at this point  in time.

June is often a busy month for bear activity, but this  year is unusually so, according to USDA Wildlife Damage Specialist Rob Calvert.  "The early spring has fast-forwarded these bears into July feeding  behaviors, but the wild berry crop won't be ready for another month," said  Calvert.  "So they are panhandling -  coming out of the woods, often with cubs, to seek out easy sources of food near  houses and farmyards for themselves and their young."

Early summer represents a somewhat lean time for bears,  according to Andy Timmins, Fish and Game bear biologist. Last fall's acorns  have turned into woody sprouts. Lush spring vegetation has hardened off and is  less valuable to bears. Most of the summer fruits that provide food for bears  will not be available for a few weeks. "This period of low food abundance  causes bears to search out high-quality, readily available foods provided by  humans, and is the main reason why the majority of bear complaints in New  Hampshire occur during June and July," says Timmins.

The high level of bear activity this year means it is  more important than ever to remove any bear attractants from your  property.  Although black bears are  generally shy and usually avoid humans, they are opportunistic and will search  for human food supplies when natural foods are not available. Birdseed,  unsecured garbage and pet food all can be big temptations for bears.

Many backyard chicken operations in New Hampshire have  been targeted by bears this year, too.   "If you've got chickens, you need to protect them by using electric  fencing or a very sturdy enclosure," said Calvert. "Above all, the public must understand that it is  illegal to intentionally feed bears in New Hampshire," said Timmins.  "Intentional feeding can cause problems in residential areas and can  result in fines. It also threatens the life of the bear, which may have to be  destroyed if it becomes a nuisance animal habituated to human food sources.  It's unfortunately often true that 'A fed bear is a dead bear.'  So if you love bears, don't feed them."

The No. 1 rule for avoiding conflicts with bears while  hiking and camping is to maintain a clean campsite.  All food, garbage and aromatic items (like  toothpaste and other toiletries) should be stored out of reach of bears. Do not store these items  in your tent. If car camping, keep all food and coolers in a building or  vehicle with the windows rolled up.  If  camping at a remote site, bring rope to properly hang these items.  Use food canisters at remote sites when  available.  To assist visitors, the  Androscoggin Ranger District in Gorham has a limited number of bear-resistant  food canisters that are available on a first-come, first-served basis for up to  five days. For more information on this program, go to  www.fs.fed.us/r9/white

Fish and Game recommends that people take the following  action to reduce the chances of a bear visiting your home or campsite:

* Stop all bird feeding by April 1 or as soon as snow  melts.     * Clean up any spilled birdseed and dispose of it in the  trash.     * Secure all garbage in airtight containers inside a  garage or adequate storage area, and put garbage out on the morning of pickup,  not the night before.     * Avoid putting meat or other food scraps in your compost  pile.     * Don't leave pet food dishes outside overnight.     * Clean and store outdoor grills after each use.     * Do not leave food, grease or garbage unsecured around  campsites.     * Store food and coolers in a closed vehicle or secured  area while camping.     * Finally, never intentionally feed bears!

"During these challenging times, we don't want to  forget the amazing ecological, cultural and recreational values that bears  represent to our state and citizenry," said Ellingwood. "Our ability  to maintain bears in a positive light is largely impacted by the behavior of  people.  Anything the general public can  do to keep our wild bears wild will contribute to the future well-being of this  invaluable wildlife resource."

If you have questions about bear-related problems, you  can get advice by calling a toll-free number coordinated jointly by the U.S.  Department of Agriculture's Wildlife Services and the New Hampshire Fish and  Game Department:  1-888-749-2327  (1-888-SHY-BEAR).