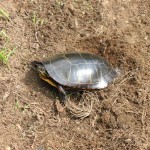 Turtles are in my yard constantly.

CONCORD, N.H. - While you're outdoors spending time in  New Hampshire's woods and wetlands this year, keep an eye out for reptiles and  amphibians. The New Hampshire Fish and Game Department collects information on  these sightings to help monitor the state's reptile and amphibian populations.

Last year, more than 250 volunteers in the Reptile and Amphibian Reporting  Program, or RAARP, reported 82 frogs, 56 salamanders, 176 turtles and 134  snakes.

Find out more about participating as a RAARP volunteer at  wildnh.com/Wildlife/Nongame/reptiles_amphibians.htm  or call Fish and  Game's Wildlife Division at 603-271-2461 to request a RAARP volunteer  information package.

This year, biologists are asking RAARP volunteers to help  fill in gaps in the data for several seldom-seen reptiles and amphibians,  including the mink frog, Fowler's toad, leopard frogs and several species of  salamanders, frogs, turtles and snakes.

Outdoor Adventure Talk: Black Racers and Blandings Turtles The public has a chance to hear firsthand about the  amazing diversity of reptiles and amphibians in New Hampshire at a free talk  set for Wednesday, April 24, 2013, at 7 p.m. at the New Hampshire Fish and Game  Department (11 Hazen Drive) in Concord. N.H. Fish and Game Nongame biologists  Mike Marchand, Brendan Clifford and Loren Valliere will discuss current  research being done on Blanding's turtles and black racer snakes. Participants  will be able to try out equipment that biologists use in the field and learn  how they can help researchers.

Reporting Wildlife Sightings "With the 2012 reports, the RAARP program has almost  hit the 10,000 mark for reptile and amphibian records collected since the  program began in 1992," said wildlife biologist Michael Marchand of Fish  and Game's Nongame and Endangered Wildlife Program.  Several years ago, the RAARP program was combined  with the NH Wildlife Sightings web reporting system, which allows additional  wildlife species such as certain birds and mammals to be reported.

Reptiles and Amphibians - An Early Focus of the Nongame Program RAARP was one of the earliest initiatives of the Nongame  Program, which is celebrating its 25th anniversary this year (1988-2013).  Working with nonprofits and universities, volunteers and conservation  specialists, the Nongame program has become a leader for a statewide coalition  of partners dedicated to conserving wildlife and habitat, guided by the state's  Wildlife Action Plan.

When the Nongame Program was established in 1988,  surprisingly little information existed about the distribution of frogs,  snakes, salamanders and turtles in New Hampshire. The Nongame Program worked  with Dr. Jim Taylor at the University of New Hampshire to enlist volunteers to  send in reports on amphibians and reptiles and published his book, Reptiles and  Amphibians of New Hampshire. The Reptile and Amphibian Reporting Program  (RAARP) was formally established in 1992, and volunteers soon had documented  hundreds of new sightings.

"The RAARP program has been a very useful tool for  gathering species information in New Hampshire," said Marchand. "Every  year we learn more about these fascinating creatures and where they  occur."

The N.H. Fish and Game's Department's website has  extensive information on reptiles and amphibians of NH, including photos of all  native species, which have been very popular with the public. Visit wildnh.com/Wildlife/Nongame/reptiles_amphibians.htm

The N.H. Fish and Game's Department's Nongame and  Endangered Wildlife Program works to protect over 400 species of mammals,  birds, reptiles, amphibians, and insects and other invertebrates in New  Hampshire. Learn more about the Nongame Program, and events celebrating its  25th anniversary, at wildnh.com/nongame