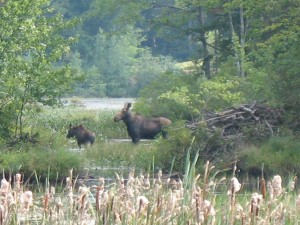 Used to see Moose in my backyard, no longer

Are moose about to disappear from the New Hampshire landscape? Rines: In the short term no; in the long-term, we don't know. However, many of the numbers I've seen reported recently on the moose population have been incorrect. The peak population for moose in New Hampshire was in about 1996, when we had 7,600 moose in the state.  Currently our moose population stands at about 4,400 animals. The public set the goals for the moose population through a public participation process.  A lot of that downward trend has occurred because people requested fewer moose. Why? The primary driver for the public desire for fewer moose has been to reduce moose-vehicle collisions. These  encounters are now down to about 170 per year; from 1996 to 2002 the average number of moose killed by vehicles in New Hampshire was well above 200 (225-265 per year). However, other forms of moose mortality appear to be on the increase.

Are moose numbers down throughout the state? Rines: We're most concerned about the White Mountains and central New Hampshire, where we have seen pretty significant reductions in recent years (since 2007), even with reduced numbers of moose hunt permits being issued. We believe these areas are likely being hit with the double whammy of both winter tick and brainworm (a parasite that deer can transmit, but are unaffected by). In other parts of the state, the Connecticut Lakes Region is at goal while the North region is slightly below goal, as is the Southeast region. Southwest New Hampshire remains below goal.

People say they are not seeing as many moose in the North Country as they used to.  Is this because moose numbers are down? Rines: Yes, in part. But at present, moose are at goal in the Connecticut Lakes Region and also in two of the three units that make up the North region. We hope we'll be able to maintain moose at these goals. So far, the only parts of the state where we are seeing dramatic declines below goals are the White Mountain and Central regions. Keep in mind that being able to see moose on the side of the road is not necessarily dependent on the number of moose in an area. "Moose Alley" in Coos County is a perfect example; there, salt use on the road has been reduced and salt licks have been purposefully drained, and the roadside browse has grown out of reach of moose. So now fewer moose are being attracted to roadside browse and salt licks where they are most visible.

How big a problem is winter tick? Rines: In New Hampshire, our winters are growing shorter, snow arrives later and melts earlier. Based on research conducted from 2001 - 2006, we know that our northern moose experience occasional increased mortality from winter tick. This mortality rate can change dramatically from year to year because of changes in snow pack. If we have a snow-free April followed by a snowless November, both tick numbers and moose mortality will increase. Even if ticks don't kill the moose, cow moose with high tick loads may lose so much weight that their fertility is reduced. In the North and Connecticut Lakes Region we are seeing reduced body weights and reduced reproduction - mainly due to winter tick. Winter tick is also influenced by moose density; the more moose you have, the more winter ticks there are. For more in-depth information on this issue, " an article in NH Wildlife Journal Magazine.

What does the future look like for the New Hampshire moose hunt? Rines: We don't know what the future holds, but we are concerned. We know that moose numbers are below goal in several regions, and moose weights and reproduction are also down in some regions. In response, we've been dropping permit numbers since 2007. We've gone from 675 permits to 275 permits issued in 2012-2013.  While we won't know until this fall how the population is faring as a result of this most recent permit reduction, current information suggests that New Hampshire's moose population may continue to decline in some regions. If permit reductions do not work, things could change appreciably in the future.  We still have this fall's moose hunt and observation data to review before those recommendations are made, however. We will continue to monitor our moose population closely; if it keeps declining, we will reduce permits accordingly in an effort to maintain moose on our landscape.

What's happening with moose in other states? Rines: We are not alone. Moose in several jurisdictions are declining. Minnesota, where winter tick and brainworm are significant factors (though not the only cause of mortality), has ended its moose hunting season because of rapidly declining regional populations. Nova Scotia has seen dramatic reductions in some moose populations. Maine's southern moose population is seeing significant winter tick infestations. Other states and provinces on the southern edge of moose range are also seeing reductions in some of their moose herds.

Is this trend being driven by climate change? Rines: There is no simple answer as to why this is happening. In general, it appears that as our weather changes, with winters growing shorter and temperatures on the rise, moose mortality increases and reproduction decreases. Where the snow and cold of winter continue to last from November through April, moose seem to continue to do well. The affect of other factors on moose may also be changing with the climate. Information from both our own research and that done in Minnesota suggests that other infections and parasites may be contributing to increased mortality and reduced reproductive rates.

Is there anything we can do to prevent winter tick? Rines: Winter ticks are dependent on two things: moose density and weather.  There is some evidence that the fewer moose you have, the mortality rate from winter tick goes down because there's not as many ticks around. In southwestern and southeastern New Hampshire, we rarely see moose dying from winter tick.  The moose density at which that starts to occur is quite low, however. The other thing people can do is try to address climate change.

Could you tell us about the major new research effort underway? Rines: It's clear that we need to learn more about the causes of moose mortality and how our changing weather patterns may be affecting both the causes and rates of mortality in our moose herd. So Fish and Game is partnering with the University of New Hampshire in a major new research effort. Funded entirely by federal Wildlife Restoration dollars, this project updates and enhances the research we did from 2001-2006. Over a two-year period, we will place radio collars on 80-90 adult moose cows and calves. A helicopter wildlife crew will capture and collar the animals. We will track the collared animals for four years, monitoring them for as long as the collars keep transmitting.  We'll be looking at how long the individuals live; and when they die, we'll try to get there as soon as possible to determine cause of death. This research will help us determine what the mortality rate and causes are at this time.  It seems to have increased since our last mortality research project.  We want to know if mortality is being caused by winter tick or other factors.  These answers will inform future management decisions.

What do you hope to gain by this research? Rines: We hope to find out whether the increase in mortality and reduction in reproductive success is because of winter tick, or if we are seeing additional disease and parasite problems or other causes of mortality that we weren't seeing a few years ago. If this trend is driven primarily by winter tick, then every year will be different because weather is such a big player.  What we learn will help our moose management team anticipate and respond to changing moose mortality and productivity. Things are going to change year by year, and we'll have to adjust our approach accordingly. New Hampshire moose are in decline in many of our management regions but they are not going to be gone tomorrow. The fact of the matter is that we don't know what the future holds, but we're hopeful that a combination of research and management efforts will allow us to do all we can to secure the future of New Hampshire's invaluable moose resources.