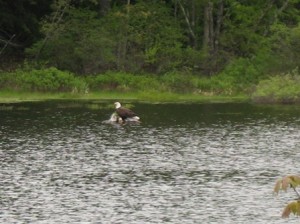 Bald eagles in the state had a very good nesting season in 2013, according to a report from Vermont Fish & Wildlife Department and Audubon Vermont. From 16 known nests, Vermont's bald eagles produced 26 fledglings, or offspring that survived to leave the nest. This is an increase from 2012, when 24 fledglings were produced.

"Not all bald eagle nests are successful every year," said John Buck, migratory bird biologist for the Fish & Wildlife Department. "Late winters, food shortages, or even the nest tree falling down can cause a nest to fail. Despite the potential for these natural setbacks, Vermont still experienced a net increase in eagles fledged this year, which is very encouraging."