I was watching an outdoor program and I saw these units being used, please read this article and refer it to anyone who wants to share the outdoors. 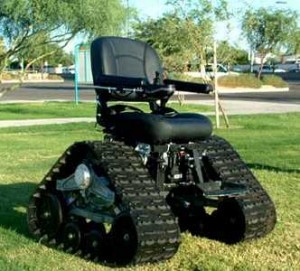 (CNN) -- Cpl. Michael Boucher will never forget June 12, 2011. He was on his second deployment with the Marines in Afghanistan. Another squad had been hit by two improvised explosive devices, and he was helping to clear the landing zone so a helicopter could pick up the casualties.

"An IED was set off, and at first I didn't realize it was me that was hit," he said. "I was in the air and looked down and realized both my feet were missing."

Lying inside the crater from the blast, Boucher began to tie a tourniquet around what was left of his right leg.

"Before I finished putting the tourniquet on, the doc got to me. He placed his hand on my shoulder and said, 'Don't worry brother. I got you,' " he recalled. "It was a blessing that I stayed conscious because I didn't have to wake up later and realize that both of my legs were missing."

At 22, Boucher was a double-leg amputee.

"The first two weeks were pretty hard. I struggled in my own head to try and picture the future of my life, and it was hard to see anything good out if it," he said.

Before the accident, Boucher loved to hunt and fish. But he questioned whether it would even be possible to do so without his legs.

"I was trying to figure out in my mind what I was going to be able to do and what I wasn't," he said.

Thanks to an all-terrain wheelchair, Boucher is one of a growing number of injured veterans and people with disabilities who are getting back to doing what they love outdoors.

Designed like a mini-tank, this wheelchair can go almost anywhere off road -- through mud, sand, snow and in up to a foot of water. It can even go up and down hills.

Tim Swenson created the Action Trackchair about 10 years after his son was paralyzed in a car accident.

"You don't ever want to get that phone call, but it happened," Swenson said. "But I always thought about how can I get Jeff back outdoors and off the hard surface?"

With 30 years' experience in the motorsports business, Swenson designed an off-road electric chair that could help more than just his son.

"We just started using some of the things I knew about snowmobiles and ATVs (all-terrain vehicles) ... along with electric wheelchair components. And we started building," he said. "The tracks we use are similar in design and quality to snowmobile tracks."

The chair is controlled by a joystick and can travel up to 4 mph. It can be tilted to maintain balance on uneven terrain.

"One of the biggest fears people in wheelchairs have is falling out of their chair," Swenson said. "The chairs all come with a tilt so if you're going up and down hills ... you can maintain your chair being level."

The size of the chair can be adjusted to fit both children and adults. Accessories such as trays, toolboxes and gun racks can also be mounted to them.

Swenson sold his first chair in 2009 from his factory in Marshall, Minnesota. About a year later, he began designing a second model -- one that allows paralyzed people to stand up.

"There are some standing units out there for people that are on concrete but nothing off road," Swenson said. "I started thinking about how can we help these people stand up and be outdoors or working."

On this chair, the joystick allows paralyzed people to rise up slowly from a sitting to a standing position. They are held in place with knee supports, a seat belt and an optional shoulder harness.

"When you can stand up, now you can go back working, you can paint the house, do some welding or build things outdoors," he said.

But mobility comes with a price. The standard chairs range from $10,000 to $12,000 and are not yet covered by insurance.

Boucher received his chair through the Semper Fi Fund, which provides aid to injured U.S. military members. It has allowed him to get back to doing what he loves most -- hunting and fishing.

"It turns your disability into an ability," he said. "It's made a huge difference ... and it's added that independence back to my life

Taken from CNN and credit to  Natalie Angley, CNN