Without permits, bubbler owners face up to a $1,000 fine.

GILFORD " As winter approaches, it's time for owners of property and docks on New Hampshire lakes to prepare, especially with regard to ice-preventing "bubblers" that have grown in use in recent years, safety officials say. Bubblers are underwater heating and circulation systems used to protect dock areas from movements of the winter ice pack that will be coming soon. In recent years, they have caused problems when left unattended and without permits, said Capt. Tim Dunleavy of the state's Marine Patrol. A few years ago, for instance, during a warm mid-winter day, a bubbler had caused an area of ice to become thin, which endangered people trying to access the ice from a shoreline in Center Harbor. "More and more people are using them," Dunleavy said. "What happens is, during a thaw period, people and snowmobilers go on the ice and think it's safe, but it's not. If they have a permit, at least we know they are there." Without permits, bubbler owners face up to a $1,000 fine, he said. In the online Winnipesaukee Forum, members have complained about bubblers causing problems. One poster said bubblers "have continued a practice, even after notice and request, to run 1-2 (bubblers) without thermostat controls, without timers, 24/7." "This has caused the lakeshore to be open water, sometimes hundreds of feet out into the lake "¦ With the snow, the apparent danger of the thin or no ice underneath is a real concern." Dock owners know that they must either remove their structures from the lakes or pull them above the water, said Darlene Forst of the Department of Environmental Services' Shoreline Section. Some dock owners are permitted to leave them in the water for various reasons, she said. "At Ice-In, people should know they have to get their docks out of the water, unless they have permits saying otherwise," Forst said. Dock owners who don't follow the rules face fines as well, she said. Ice-In, less publicized than Ice-Out in the spring, occurs when ice covers state lakes. In some years, Ice-In has been in January. 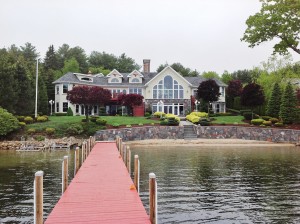 Permanent Docks Require a bubbler or Ice Damage may result